Here are some common problems encountered while running Cytoscape, and with instructions on how to solve them.

Inability to start on Mac OS

Recent updates of Mac OS have caused the OpenCL based Cytoscape Apps to fail on some machines. If this is the case, you can disable OpenCL with the following method:

Download the disable-opencl.dummy file to your CytoscapeConfiguration directory. You can browse to this directory from the Home location on your Mac. After you have downloaded it, your folder should look similar to the screenshot below. 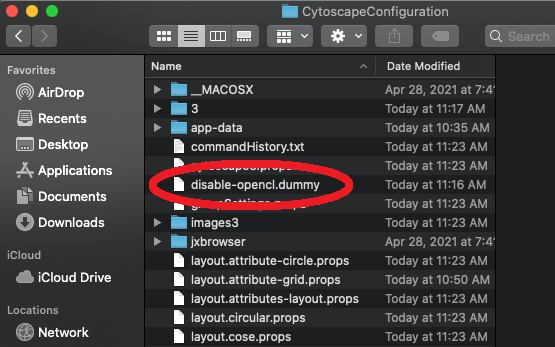 Alternatively, if you are comfortable using terminals, you can create this file using the following command:touch ~/CytoscapeConfiguration/disable-opencl.dummy

First, follow the steps outlined in our Troubleshooting page

If you’ve run the System Checker script on that page, please include the output from it in any bug reports or help requests. It will contain important information about your configuration that can help diagnose the problem.

Sometimes, additional log info can be needed to diagnose Cytoscape problems. There are two sources of log information that can be further analyzed.

This is console output from running Cytoscape. You will need to open a terminal in your operating system and copy any output you see produced.

This is a log file generated automatically by running Cytoscape. It is normally located in the following places.

You'll need to close and re-open any command windows that were open before you made these changes, as there's no way to reload environment variables from an active command prompt. If the changes don't take effect after reopening the command window, restart Windows.

If you would prefer to set the JAVA_HOME (or JRE_HOME) variable via the command line:

This only sets JAVA_HOME for the current session. To persistently set it, follow these steps:

Cytoscape may not scale well on High DPI monitors. If this is the case and you are running on a Linux machine, you can add the following line to the cytoscape.sh file:

This works on Ubuntu 18.04 with GNOME/Cinnamon. However, scaling is not respected if one starts the application via the Cytoscape.desktop application shortcut, only if launched from the terminal.